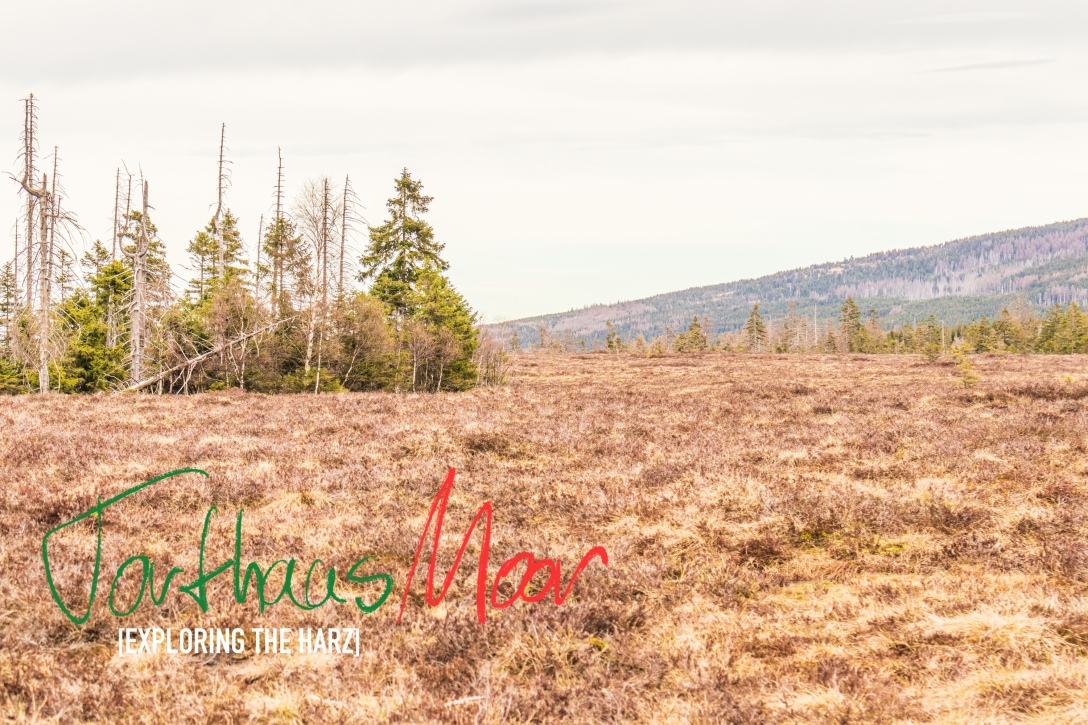 After running some Errands today, I still had a bit of Spare Time in the Afternoon. Since it is supposed to Rain all over this, and also Parts of nest Week, I decided to make the best of that Time and headed into the Harz.

My original Intent was to Hike around a certain Teich, but that was not meant to be. Dead Trees were being cleared from the Area, and the Hiking Path was closed because of that.

While I completely understand that Decision, I had to formulate another Plan quickly.

I decided to go for another Walk that I had planned a while ago. My new Destination was the Torfhausmoor, or more precisely the Wooden Path that leads across a Section of that Bog.

To get there, I parked near the Schullandheim just at the beginning of Torfhaus. I then headed into the Woods along the Abbegraben. That Graben Leads Water from the River Abbe to the Dammgraben.

My Path took me along a Part of the Goetheweg, which is also a Part of the Harzer Hexenstieg near Torfhaus. It is named after famous German Poet, Johann Wolfgang von Goethe, who actually quite liked the Harz.

His Epos Faust is said to have been inspired by, and to take place in, the Area.

After a while, the Goetheweg then splits up into two Arms. One continues to follow the Abbegraben, while the other takes a detour across the Torfhausmoor.

There, it is carried across the Bog via a wooden Steg, or a Boardwalk. That Thing is relatively narrow, and so there are a few ‘Meeting Places’, where Hikers can safely pass each other.

At those Places, there are also Benches installed into the Walkway. Those invite Hikers to linger for a while, taking in the Views of the Moor and the Brocken behind it.

Coincidentally, the Goetheweg is also one of the more popular Hikes to the highest Peak in the Harz.

Of Course the Torfhausmoor is absolutely no exception to that very infuriating Behaviour. At the Bench where I was sitting for a while, countless Cigarette Butts were lying around in the Bog, poisoning the Water.

Those Cigarette Butts are especially Harmful to Microbes living in the Moor, and also to Fish swimming in the Water downstream. It is also very much illegal to Smoke in the National Park, or in Forest in Niedersachsen between March and October in general.

I really do not get such People. Such a blatant disregard for Nature really makes me very mad.

While walking across that Steg, I could really feel the Bog shifting below my Feet. But maybe that was just imaginary.

Anyhow, such wooden Walkways are one of my absolute favourite Kinds of Hiking Paths that we have here in the Harz. They are not only nice to walk on, but they also look awesome in my Landscape Fotos.

They also allow Hikers to experience the Bogs, for example the Torfhausmoor or the Hochmoor at the Oderteich, without disturbing those critical and also very sensitive Biotopen too much.

After walking across that beautiful wooden Steg, I then had the Choice of either walking back towards Torfhaus along the Abbegraben, or to turn around and cross the Torfhausmoor again.

Since there was a sudden influx of Hikers though, my decision came easily. I decided to ditch the Big and walk back along that other Part of the Goetheweg. From there, I would also have a nice View over my previous Path.

I really did like that. What I did not like too much was the Path. It was very stoney, and quite narrow in some Places.

Being out in Nature is always really nice, and enjoying the last Day of nice Weather at the Torfhausmoor was very much enjoyable today. Of Course it would have been much better without those Cigarette Butts though.

While I am trying not to get phased by Things that I can not change anymore, they certainly still make me very upset at Times. People really should trea Nature much bette than they usually do.

Anyhow, today was a great Day, and no e can ale that away from me.