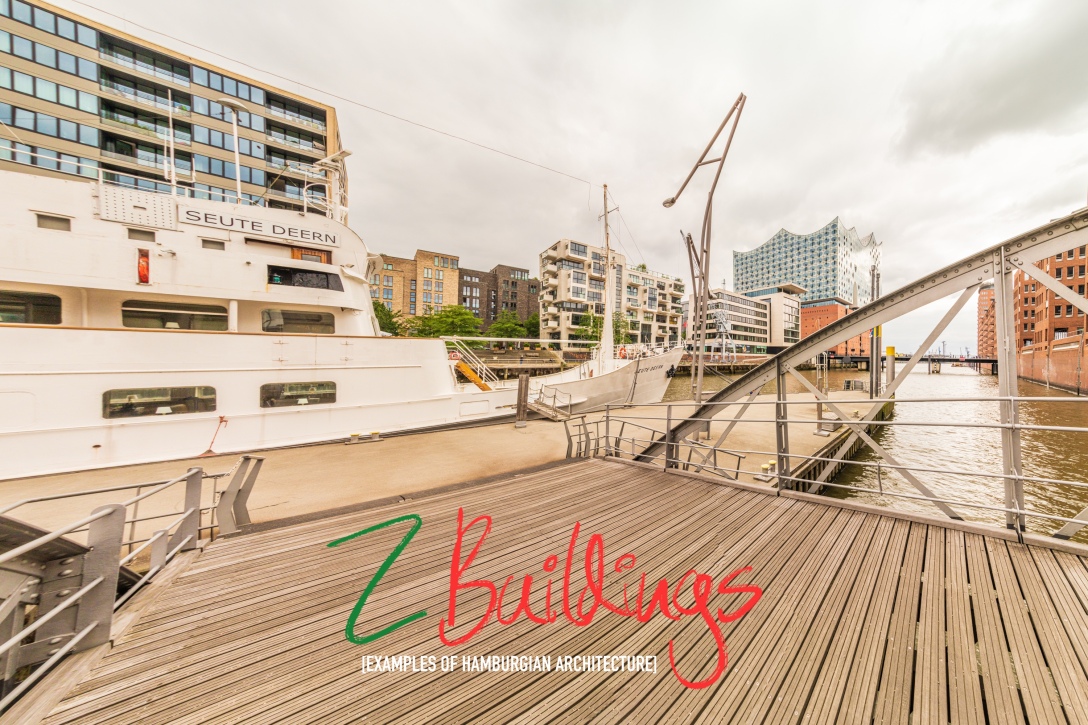 When I was out there Exploring in the Speicherstadt once again, I saw a lot of beautiful Things. All those old Brick Warehouses are just so awesome, I really love it to spend some Time there whenever I get the Chance to do so.

There are also some very stark Contrasts between the Speicherstadt and the neighbouring HafenCity and Überseequartier, which are completely different in Style. Those Areas are also much more recently developed though.

The starkest Contrast between those Styles lies between two Buildings on opposite Ends of the Area in my Opinion. One of those being the Hamburger Wasserschloss in the Dienerreihe, the other being the Elbphilharmonie.

One is a old school Brick Building that kinda looks like a Castle, hence the Name. The other is a larger Glass Structure sat on Top of the old Kaispeicher A from the 1960ies.

When it was still the Kaispeicher A, it was the only Speicherstadt Warehouse that could be reached directly by the bigger, ocean-going Ships. The rise of the Container in the 70ies kinda meant its demise in that role though.

Both Buildings are absolutely beautiful, but they are also polar opposites to each other.

The Elbphilharmonie is a large Concert Hall with a beautiful Observation Deck, a large and probably very expensive Hotel as well as a Restaurant and a few Apartments.

It took much longer to build than it should have, and Costs skyrocketed as well. But in the End, it all turned out extremely beautiful in my Opinion.

That Observation Deck, the Elbphilharmonie Plaza, was once free to visit, but now a Ticket costs 2€. But I guess that is still okay, since the Views are totally worth it.

The Wasserschloss on the other Hand dates back to 1907 and was originally built to house Port Workers back in the Day. It is now one of the oldest, most famous, and definitely most photographed Buildings in the Speicherstadt.

Nowadays, the Wasserschloss is still commercially used. There is a Restaurant and a beautiful Teekontor. That is a fancy term for a Tea Shop. I never actually visited the Tea Shop, but it is supposed to be very awesome!

Because of its prominence right at the confluence of two Fleete, the Holländischbrookfleet and the Wandrahmsfleet, the Wasserschloss is often used for all kinds of Media Productions. Like TV. Or Photography.

Coincidentally, it is also one of my absolute favourite Buildings in the Speicherstadt.

The Elbphilharmonie is a beautiful Example of modern Architecture meeting a pre-existing Structure. It looks awesome, and the Views from the Plaza Level are just Stunning.

On the other Hand, the Wasserschloss is a prime Example of Turn-of-the-Century Architecture. It is absolutely beautiful and so full of Heritage, it is almost unreal.

Its location on the Confluence of two Fleete also makes it a superb Foto Subject. Luckily, ther is a Bridge nearby. To get a similar View of the Elbphilharmonie, which also sits between two Bodies of Water, you would need to take one of the Harbour Ferries.

In the Case of the Elbphilharmonie, those two Waters are the Norderelbe and the historical Sandtorhafen.

These two Examples of Hamburgian Architecture also show of the change of Time. One Building is old and beautiful, while the other embraces its Heritage with a huge modern addition on Top of it.

And yet, they still both belong exactly where they stand. They belong to Hamburg like the Elbe and the Alster. I am really happy that they exist.

(The Elbphilharmonie was designed by a Swiss Firm, the Wasserschloss by two Hamburgian Architects. Its Style is called Backstein-Expressionismus.)